Healing Criminal Justice chronicles the author’s journey as a criminal attorney, judge, and judicial activist navigating and bucking an unjust criminal justice system. The central theme of the book is the rediscovery of the healing power of community within the criminal justice system. Judge Jeffrey Tauber lays out a vision of the future in which society, recoiling from an over-reliance on imprisonment, returns to its historic reliance on community to control criminal behavior.

This is the story of how a young Oakland judge fought to keep drug offenders out of prison by creating a new court program, the drug court, that provided drug users with treatment rather than imprisonment. Judge Tauber would take his drug court model to Washington DC, building the National Association of Drug Court Professionals (NADCP) into the leading criminal justice drug reform organization in the nation, today representing 5000 community-based court rehabilitation programs.

Judge Jeffrey Tauber is the founding president and president emeritus of the National Association of Drug Court Professionals (NADCP). He is currently the director of Reentry Court Solutions, an educational initiative that maintains an archival website for the industry, and provides technical assistance, training, speaking, and consulting services to the field. 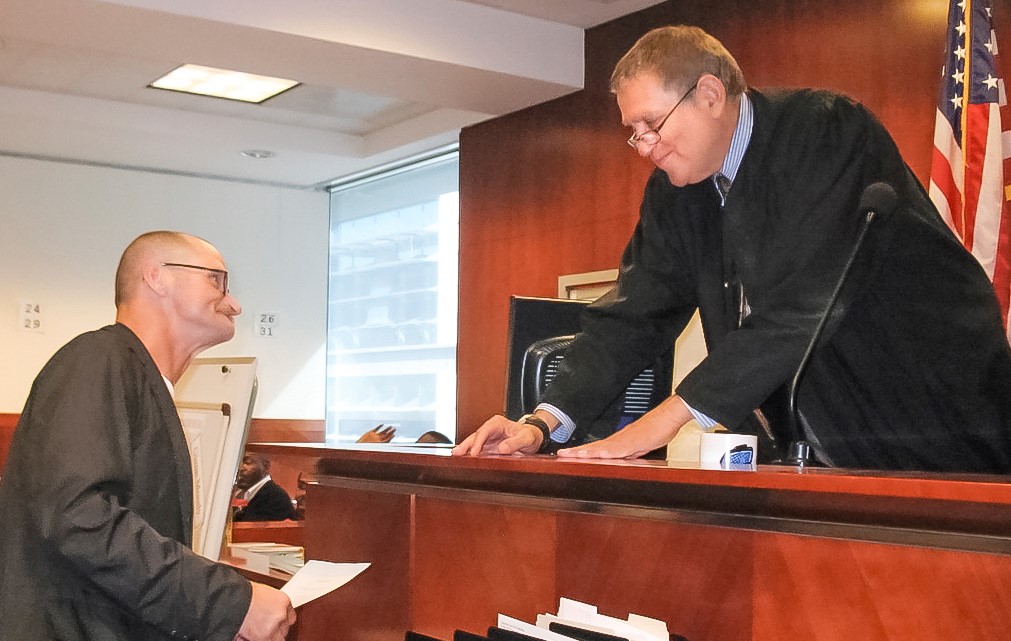 “The establishment of drug courts, coupled with [their] judicial leadership, constitutes one of the most monumental changes in social justice in this country since World War II.”

Over 1.5 million persons have participated in drug and problem-solving court programs since the founding of NADCP in 1994.

The number of drug and problem-solving courts has increased from two dozen at the founding of NADCP to over three thousand today.

NADCP has trained over 250,000 justice and treatment professionals.

Jeffrey Tauber is currently the Director/Editor of Reentry Court Solutions (RCS), an educational initiative that provides a national information website (reentrycourtsolutions.com), as well as technical assistance, training, and advisory services to the field.

In June of 1999, the newly founded International Association of Drug Court Professionals (IADCP) elected him their first chairperson. In that capacity, he presented before the United Nations, the Organization of American States, the Caribbean Conference of Magistrates and other International organizations.

He has consulted and been an advisor to over a dozen nations.

As a judge in Oakland, California, Jeffrey Tauber initiated and presided over the design and implementation of the Oakland Drug Court Program, one of the first in the nation (1990), and was the first President of the California Association of Drug Court Professionals (CADCP).

While on the bench, (1985-97) Oakland’s Drug Court received the Public Employees’ Roundtable Award for “Outstanding County-Run Public Service Program in the Nation” and the California Administration Office of the Courts’ “Ralph Kelps Award for Court Innovations”. Judge Tauber (ret.) was a member of the California Judiciary from 1985-1997. He is a graduate of the City University of New York and Boston University Law School.

NADCP’s Board bestowed upon Judge Jeffrey Tauber, the singular honor: “President Emeritus of NADCP for Life”. The plaque presented at the 14th Annual National Conference in St. Louis, read:

“For Creating the Spark That Revolutionized the Justice System”

The view from 30,000 feet is indeed extraordinary. Beginning in 1974, when I became a public defender, and then over the next twenty years, I recall almost everyone from judges and prosecutors to the news media declaring that those who broke the drug laws needed to go to prison. At the time “Nothing Works” was the slogan du jour when it came to drug abusers.

Sometime after becoming a drug court judge I came across a book that spoke to a new generation of criminal justice professionals. Written by Professor Lawrence Friedman of Stanford University (his book is titled The Roots of Justice: Crime and Punishment in Alameda County, 1870–1910). What drew me to the book was its subject matter, a historical view of criminal law in Alameda county 100 years before I became a public defender, commissioner, and judge there. I recognized that many of the problems described in that book persist to this day, although many have also grown exponentially in complexity.

The book described how the courts as a rule would over-punish offenders who belonged to the working class or worse: vagrants and drifters, the unemployed, and social misfits. Friedman pointed out that those of the lower classes were considered to lack social and moral value as much as they did economic worth.

Before the dawn of the 20th century, the Irish were picked up for drunkenness, Chinese immigrants were arrested for gambling and opium addiction, and African-Americans (2% of all Oaklanders) were arrested—some would suggest for simply being black in the city of Oakland—all at three times the rate of the general population. One fascinating insight I gleaned from Friedman’s book was that “real crime”—violent or property crime—was decreasing at the end of the 19th century, while crimes against the social and moral order were increasingly being prosecuted. The emerging criminal justice professions, made up of white, middle-class males, were committed to protecting their own class privilege and sense of morality at all costs.

It is a system that kept blacks and immigrants down. While that is all too real, it was part of a larger movement to control and punish immorality in the lower classes. More to the point, it would take a blind man to miss the history of injustice cloaked in the majesty of the law. Whether one looks abroad to the pogroms against the Jews in Russia, to the Nazi judges who sanctioned genocide, or to the South African judges who enforced apartheid, the history of the courts is too often the history of class, religious, and ethnic bias and injustice.

Certainly, the same arc of history can be seen in this country. From the Puritan Blue Laws of colonial times and the repeated abrogation of treaties with Native Americans, to the Chinese Exclusion Act and the Jim Crow laws, it cannot be claimed that justice has prevailed in our courts of law. In fact, it would be more honest to say that even the fairest of jurists could not operate in a system of laws that is inherently unjust and still reach just decisions. “Though the law may be applied equally, institutional bias will prevent a just resolution for those in the lower classes.

I saw this firsthand in courts where I worked. While some may say that I was a part of it (and that I would not dispute), most jurists followed the law and were grateful to be a privileged part of that system, even if it meant keeping others down. That this was an issue of class is brought home by the fact that judges, prosecutors, and police who were black or brown applied the law with as much force and cynicism as their white colleagues (and in some cases considerably more so).

None of these revelations were new, exactly, when I became aware of Friedman’s seminal work. At the time I had been a part of that criminal justice system for many years. I understood, sometimes at a gut level, the injustices of the criminal justice system. As a public defender and then a private defense attorney I saw too many poor and homeless citizens treated inhumanely. As a traffic commissioner I saw traffic citations freeze the working class out of the courts by imposing huge fines, fees, and penalties. As a judge I watched as drug addicts (whose crime was to wave down customers for drug sellers in exchange for a tiny piece of the drug sold) routinely sent to prison for a statutorily required minimum term of three years when the true extent of their criminality was being seriously drug dependent.

And I was the one doing the sentencing.

Excerpt From: Jeffrey Tauber. “Healing Community Justice: A Journey to Restore Community in Our Courts.”